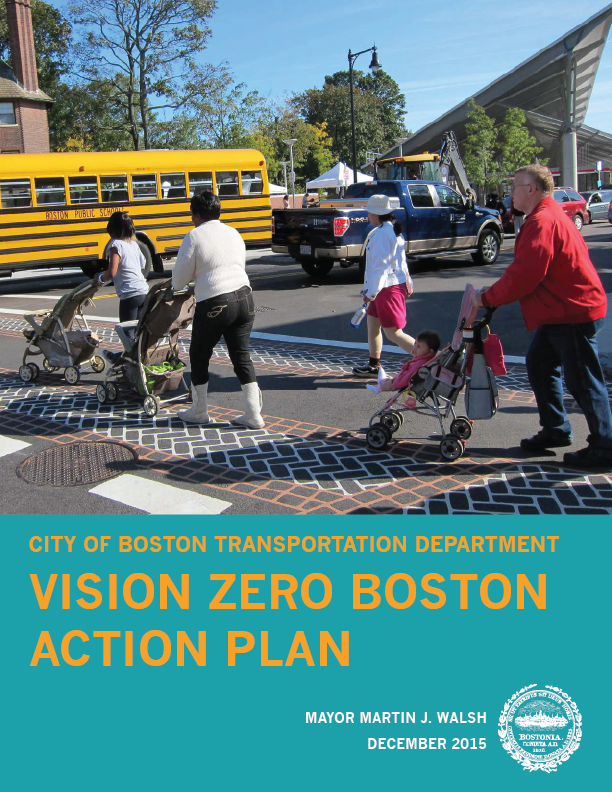 Official Statement of the Massachusetts Vision Zero Coalition in response to the release of the City of Boston’s Vision Zero Action Plan on 12/9/2015:

Today the City of Boston released its action plan for implementing Vision Zero. The Massachusetts Vision Zero Coalition applauds the City for taking this important step in bringing the number of fatalities on our streets to zero.

In the wake of a series of tragic and preventable crashes, injuries, and fatalities in Boston and throughout the state, it is more important than ever to focus the priority of transportation policies and projects on safety.

The City must play a critical leadership role, but every community, neighborhood, and individual needs to participate as well. We look forward to working with the City to move from planning to implementation and hope Boston’s example will lead to additional commitments throughout the State in the coming months.

To learn more about the Massachusetts Vision Zero Coalition and read our comment letter that helped shape the Action Plan, visit: http://visionzerocoalition.org

Statements from members of the Massachusetts Vision Zero Coalition

“LivableStreets is excited to work with the City of Boston and the Massachusetts Vision Zero Coalition to implement this action plan. The plan shows great promise for producing real results, but the true measure of success will be seen on our streets — when there is a measurable decrease in traffic related injuries and fatalities.”
Stacy Thompson, Deputy Director, LivableStreets Alliance

“WalkBoston is pleased that Mayor Walsh is acting on one of the key recommendations of his Transition Team to make the Vision Zero Action Plan a reality. As a member of the City’s Vision Zero Boston Task Force, WalkBoston is working with the relevant city agencies to change signal timing, improve visibility at crosswalks and identify intersection improvements that will make walking safer for everyone in Boston. Whether resident, commuter, visitor or student - everyone is a pedestrian.”
Wendy Landman, Executive Director, WalkBoston

“TransitMatters is determined to secure the safety of citizens within the Boston metropolitan region while improving mobility across the region. We are encouraged by Mayor Walsh’s commitment to safety for all road users, including those who choose or otherwise must use transit to move about the region. Transit travel times must be improved to reduce auto-dependence while investing in infrastructure that simultaneously improves the safety of transit’s vulnerable road users.”
Marc Ebuña, Communications & Programs Director, TransitMatters

“Dot Bike is excited to see that one of the City’s first Neighborhood Slow Street Pilot Zones will be located in the Talbot Ave/Norfolk St triangle, and that Talbot Ave in Codman Sq has been identified as a Vision Zero Priority Corridor. We also look forward to seeing the Mass Ave Vision Zero Priority Corridor extend south of Melnea Cass Blvd to provide residents of Roxbury and Dorchester a safe cycling route into the urban core.”
Jonathan Fertig, Deputy Director of Advocacy, Dot Bike

“MassBike is looking forward to working with the City of Boston on ensuring that roadways are safe for all road users, regardless of mode. Vision Zero is an excellent supplement to Complete Streets and innovative road designs that encourage more people to bicycle. We look forward to Vision Zero becoming a part of the lexicon in communities across the state.”
Barbara Jacobson, Programs Director, Massachusetts Bicycle Coalition

“Safe Roads Alliance congratulates Mayor Walsh and the City of Boston along with the Massachusetts Vision Zero Coalition for implementing this action plan. It is important to understand that not all crashes are “accidents”.  We look forward to working with the Mayor on making our roads safer for everyone.”
Jeff Larason, President, Safe Roads Alliance

“The Boston Cyclists Union thanks Mayor Walsh for his continued commitment to Vision Zero, displayed today through the release of this action plan. As a member of the City of Boston's Vision Zero Task Force, and the newly formed Massachusetts Vision Zero Coalition, the Bike Union looks forward to continuing to work with the city and other partners to eliminate traffic fatalities in the Boston area. This Action Plan is a tremendous step in the right direction, and the Bike Union will continue to advocate for changes like the installation of truck side-guards, and the collection and analysis of crash data, helping make the streets safer not only for cyclists, but for all road users.”
Becca Wolfson, Interim Executive Director, Boston Cyclists Union