On May 10th, 2017, hundreds gathered at Commonwealth Avenue & Clarendon Street in the Back Bay to remember the life of Rick Archer, who was killed in a crash while biking home to South Boston on April 30th. Following the ceremony, a procession biked to City Hall to attend Boston City Council's hearing on the Boston Transportation Budget for FY18. The following is the Coalition's letter to the Council in response to the hearing.

If you think Boston deserves safe streets now, please reach out to your Councilors and contact the Mayor's office. Vision Zero is about changing the way a city manages its streets, but the existing budget recommendation is business as usual. Safety should not be a privilege afforded to only some Boston neighborhoods.

Letter from the Coalition to Boston City Council 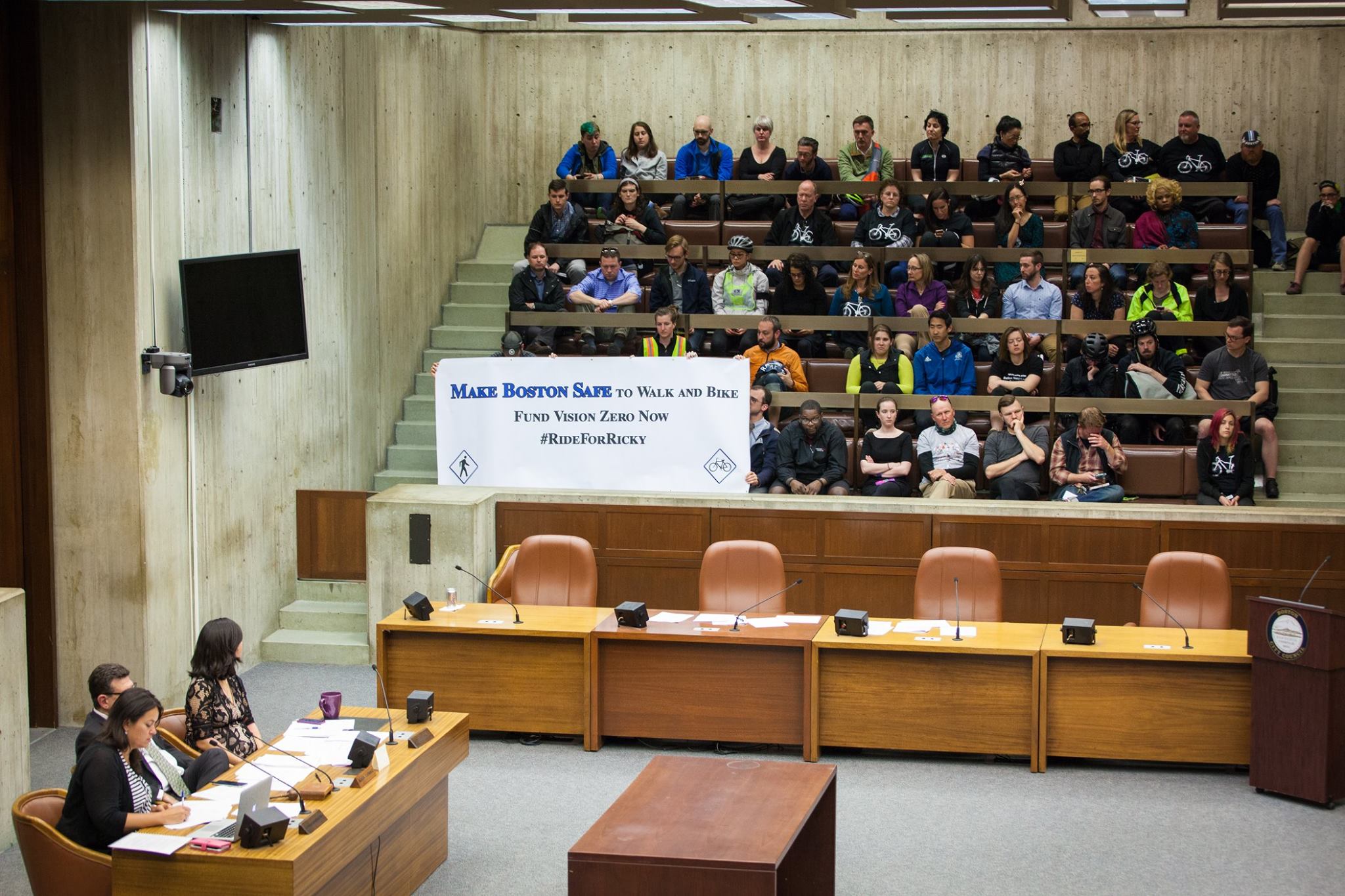 Thank you for your leadership during last night’s hearing on the Boston Transportation Department’s budget for FY18.

It is clear from the hours of public testimony and council debate that we can’t wait; Boston needs safe streets now.

If the City of Boston is going to reach Vision Zero by 2030, we will need to accelerate our response to the traffic violence happening daily on our streets. These are crashes, not accidents. Our streets see far too many fatalities and injuries, but good design can minimize conflicts, encourage safe behavior, and save lives.

Vision Zero is about changing the way a city manages its streets, but the existing budget recommendation is business as usual. Meanwhile, our streets are in crisis. At least seven people have died on Boston streets in 2017, and last year we saw a record high for pedestrian fatalities with 15 people killed while walking in the City of Boston. Boston EMS reported that 904 people were hit and injured while walking in Boston in 2016, up from 789 injuries in 2015 (and 724 in 2014).

That translates to two to three people getting struck by vehicles every single day.

Simply put, the Massachusetts Vision Zero Coalition feels strongly that the Transportation budget as it currently stands is insufficient to reduce the number of fatalities and serious crashes on our streets. In December 2016 the Coalition released a Progress Report assessing the City's Vision Zero initiative so far. Then and now, we are calling on the Mayor and the City Council to increase both operating and capital resources.

Safety should not be a privilege afforded to only some Boston neighborhoods.

These are not experimental treatments. They are proven traffic calming methods implemented throughout Greater Boston and other cities worldwide. The only risk is doing nothing. This is one of the many programs we would like to see expanded throughout the City with additional funds.

The City of New York spends about $20 per person on Vision Zero annually, and San Francisco spends $75 per person annually. Both cities have seen declines in overall traffic fatalities despite a troubling rise in fatal crashes nationwide. Boston is spending less than 5 dollars per person.

We know where the problems are, and we know what needs to get done. This isn’t a question of getting more data and studying the problem further while lives hang in the balance. Will we have the political leadership and proper funds needed to get the job done? It’s up to you.

Our Coalition members would like to work with you and your colleagues to develop sufficient funds for addressing traffic violence in Boston.

We look forward to working with you.